There’s a great divide between what people ate in earlier prehistory and in later prehistory, and it all comes down to when did farming start. One of the places farming was independently invented was in the Near East in around 10,000 BC. It slowly spread outwards and got to Britain by 4000 BC. This early farming culture is called the Neolithic (New Stone Age). 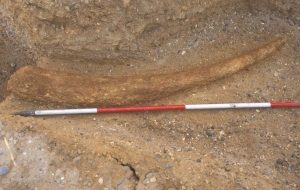 Tusk of the extinct straight-tusked elephant from Swanscombe around 400,000 years ago.

Homo heidelbergensis hunted or scavenged horse and rhinoceros around 500,000 years ago at Boxgrove in West Sussex during a warm period between glaciations. Homo neanderthalensis may have hunted elephants a mere 100,000 years later at Swanscombe in Kent. The now extinct straight-tusked elephant had lived in a very warm interglacial when Britain was probably cut off from the continent temporarily. Elephant bones were surrounded by flint tools that had been made on site, used to butcher it and then abandoned afterwards (Wenban-Smith 2013). 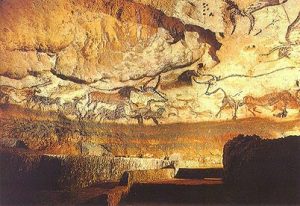 Before this all over the world people had got their food by hunting, trapping, fishing and gathering wild food. The hunter-gatherer diet was quite rich. In the Palaeolithic (Old Stone Age, which finished around 10,000 BC) certain animals were hunted that had adapted to the cold temperatures of the Ice Age and died out when the climate warmed. In the painted caves of Lascaux, which date to about 15,000 BC, you see horses, bison, aurochs (another species of wild cow – now extinct), giant and red deer but never reindeer, which were actually one of the main animals the people who lived nearby relied on. There are no mammoths represented here either, although they do appear at the nearby Rouffignac cave, but are not usually in the diet of the painters of this date in this area of France.

The cave art of Creswell Crags, on the Nottinghamshire/Derbyshire border near Worksop, representing a deer and an ibex (a type of goat) then may not be representative of what was hunted for food in Britain at this time around 12,000 BC. A fragment of rib bone from an unidentified animal with a scratched image of a horse’s head on it has led to the suggestion that a few intrepid hunters were up there hunting wild horses on the tundra.

The bones of humans found in Kendrick’s Cave near Llandudno in Wales were tested using stable isotope analysis. This measures the ratios of isotopes of certain elements in bone collagen from ancient bone and can give indications about what kind of food is being eaten (marine or terrestrial, animal or plant) and can also indicate where a person had grown up and traveled to. The ratios of stable isotopes of carbon and nitrogen from the human bone at Kendrick’s Cave suggested that they got about a third of their food intake from marine mammals, and the team who undertook the work suggested this was probably seal meat (Richards et al 2005, 393), even though the animal bones left in the cave were all from terrestrial mammals.

People living on the coast do seem to have continued to heavily use marine resources. Many shell middens survive on the coast of Scotland but the coastline of England has changed so much since the end of the Ice Age that many of these are probably now beneath the sea. In Scotland such middens have yielded shells of many crustaceans and molluscs, as well as fish and marine mammal bones, e.g. Sand at Applecross, Wester Ross which dates to about 6500 BC (Hardy & Wickham-Jones 2009). 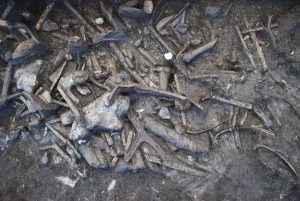 By this time we are definitely in what archaeologists call the Mesolithic (Middle Stone Age) after the ice retreated but before farming was introduced. At Star Carr in North Yorkshire, which dates to about 9000 BC, the vast majority of the food being consumed seems to have been red deer, although bones of other animals like aurochs (wild cows) and wild pigs also appears. The people at Star Carr went to the sea, as we can see from the collection of amber picked up on the beach, and if they ate seafood they didn’t carry it inland. There are scant remains of pike, though, which suggests they did fish in the now vanished Lake Flixton (Robson et al 2016).

Plant remains have also turned up, although they don’t survive very well, of course. They only survive when they are charred, which might have happened if overcooked by accident. Charred plant remains found on Mesolithic sites in Scotland (and elsewhere in Britain) have included crab apple and pear pips, haw berry stones, hazelnut shells and the roots of Lesser Celandine, which would be a little like very small potatoes (Bishop et al 2013).

When farming was adopted from around 4000 BC, everything changed. Stable isotope analysis comparing human bones from the Mesolithic and the Neolithic show a marked change between eating a diet rich in fish to one with little freshwater or marine component at all (although this has been questioned: Milner et al 2003). Signs of malnutrition are often found on early farmer’s bones, caused by a diet of mostly dairy and bread. 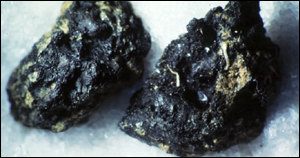 Neolithic charred bread found at Yarnton and dating to about 3600 BC.

The earliest preserved bread, charred in a fire, was found at Yarnton in Oxfordshire and dated to about 3600 BC. Wheat and barley grains have also been found charred, of a similar date and some even earlier in many places in the British Isles.

Dairying may have occurred from quite early on in the farming culture of Britain. The remains of lipids, and particularly fats from milk, have been found adhering to the inside of pots in Neolithic sites like Windmill Hill in Wiltshire and Runnymede Bridge in Surrey (Copley et al 2005).

People in the Neolithic may have had a slightly more interesting diet, though, and there are also remains of beeswax found in pots from Runnymede Bridge and in many pots from farming communities around Europe and Africa (Roffet-Salque et al 2015). This may suggest that bees were being kept in semi-domestication and that honey would be available for farmers. There is a famous piece of rock art from Spain, the Cueva de la Araña (Spider Cave) which seems to show a woman collected honey from a hive on a cliff while bees fly around her. It is not closely dated, and may be Neolithic or much earlier. 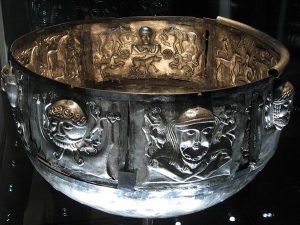 Large scale feasting sometimes occurs in the Neolithic and in later farming eras. At Durrington Walls near Stonehenge both cattle and pigs were slaughtered at winter-time, presumably for large midwinter feasts. Feasting also seems to be a part of life in the Bronze Age and Iron Age periods, from the discovery of large cauldrons and flesh hooks, such as one decorated with corvids and water birds from Dunaverney in Ireland and dating to about 1000 BC, and the silver Gundestrup Cauldron (probably for some kind of alcoholic drink) from Denmark.

Talking of alcohol, a pottery vessel from North Mains, Perthshire in Scotland had a black greasy substance in it which was sampled. It was found to contain cereal pollen and meadow-sweet pollen, which was used in flavouring alcoholic drinks in more recent times, and the archaeologists suggested the pot originally contained ale (rather than beer which is flavoured with hops and is usually said to be medieval in date, though there is some evidence of hops being used in Roman ale (in Andrews et al 2011, 224-5)). The ale at North Mains dated to about 1500 BC (Barclay 1983). It’s likely that ale goes back a long way. 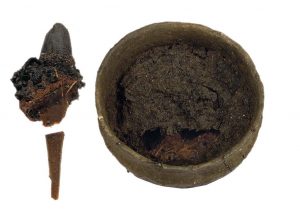 A more varied diet comes back in the Bronze and Iron Ages after the introduction of a wider range of crops such as oats, rye, beans, vetch, cabbage and other foods. A pottery bowl with carbonised food and wooden spoon still in it was recently found in excavations at Must Farm near Peterborough, dating to about 1000 BC. The food was analysed and found to be some kind of nettle stew. 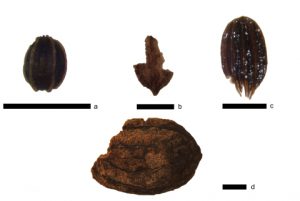 With Roman contact in the late first century BC, some of the elite of southern England took to importing wine and other exotic foodstuffs. At Silchester, a late Iron Age settlement in Berkshire, imported food included coriander seeds and olives. Some ended up in their graves to take them to the next world, or at least show off to mourners. What a waste!

Barclay, G, 1983. Sites of the third millennium be to the first millennium ad at North Mains, Strathallan, Perthshire. Proceedings of the Society of Antiquaries of Scotland 123, pp 122-281.