This new topic in the Key Stage 2 history curriculum is one of a selection of studies of world history that also include the Maya and Baghdad. All provide fascinating comparisons to later Anglo-Saxon England. What all of these cultures, with their many differences, have in common are the production of exquisite works of art, as well as complex social structures and religions.

The Kingdom of Benin is different to the Republic of Benin (formerly called Dahomey), which is between Nigeria and Togo on the West African coast. The old Kingdom of Benin is still a district of Nigeria around the ancient Benin City in the southern part of the country. A network of large walls, which have been estimated to be longer in extent than the Great Wall of China, enclosed the city and surrounding settlements and seem to have been built incrementally over hundreds of years.

Not a great deal of archaeological work has been done in the Benin City region, so much of our knowledge of the early Kingdom of Benin comes from oral histories passed down from generation to generation (often quite accurately) and written down by Jacob Egharevba in the 1930s. The Edo speaking people of Benin tell of a time when their king, the Ogiso, was not to their liking and they sent for another king to another Nigerian kingdom called Ile-Ife. One eventually came and the king was from then on called the Oba.

There do seem to be connections between the two kingdoms, as people in Benin seemed to be influenced by and may have learned from the skilled craftspeople of Ile-Ife, who produced some amazing brass busts of their rulers. Brass-casting became a very respected profession in Benin, with Oba Oguola (1280-1295 AD) encouraging them to set up a guild. 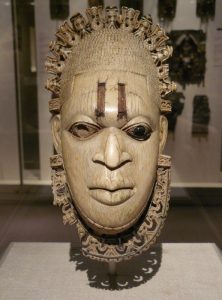 While much of the power of the country was in the hands of men, women could be influential. Oba Esigie (1504-1550 AD) created the position of queen mother, Iyoba, for his mother Idia. Idia helped quell a rebellion against her son and generally worked behind the scenes in government from her own palace. When she died her son created the first altar to a woman, and ever since queen mothers are the only other member of the royal family to have altars after their death.

Oba Esigie is said to have spent time with the Portuguese and learned their language. The European traders turned up from the end of the fifteenth century AD and their descriptions of Benin are fulsome in its praises, and we can assume that Benin City was as well-run and spectacular a place in the period before Europeans turned up. Olfert Dapper’s Description of Africa, published in 1668, described Benin City:

The king’s palace or court is a square, and is as large as the town of Haarlem and entirely surrounded by a special wall, like that which encircles the town. It is divided into many magnificent palaces, houses, and apartments of the
courtiers, and comprises beautiful and long square galleries, about as large as the Exchange at Amsterdam, but one larger than another, resting on wooden pillars, from top to bottom covered with cast copper, on which are engraved the pictures of their war exploits and battles… [It] hath thirty very strait and broad streets, each a hundred and twenty feet wide… [and] the houses stand built in rows,
in good order close by one another, as here in Europe.

Dapper hadn’t visited Benin, though, and got his reports second-hand from traders and travellers. Nevertheless, his description is corroborated by others.

Of course, with the coming of the Europeans came a huge growth in the slave trade as they settled in the Caribbean and the Americas. While it was a sign of wealth to own many slaves in Benin, the increasing demand for slaves lead to a ban on selling male citizens of Benin proclaimed by the Oba. Instead Benin became much more aggressive with its neighbours, aided by European firearms, and took prisoners of war that they sold to the Europeans. The Europeans were also known to kidnap people for the Transatlantic Slave Trade. In total it is estimated 12 million people were taken from West Africa, many of whom died on the voyage to the Americas. 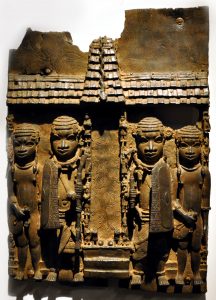 Bronze plaque from Benin City depitcing part of the Oba’s Palace, now in the British Museum. By Photo: Andreas Praefcke (Own work (own photograph)) [Public domain], via Wikimedia Commons

As Britain’s power grew as an Empire the government took control, or thought they did, of many other European countries colonies. Benin was never colonised, but trading posts were set up on the coast and the British government thought (or assumed) that the Oba would agree to their demands to trade. While Oba Ovonramwen and the entire Kingdom of Benin were celebrating the Igue festival, which was closed to foreigners, in 1897, Captain James Phillips, after having written to the Foreign Office warning them, attempted to depose the Oba by posing as a trading party and went inland. Whether the Oba was involved in the decision to kill the invading party, seeing through their guise, is disputed, but it gave the British an excuse to launch a full-scale attack.

Benin City was burned to the ground but not before the Oba’s palace was looted of all its precious brass busts, plaques, carved ivory tusks and other items, which have ended up in British, European and American museums. This was a dark chapter in Britain’s history. Oba Ovonramwen went into exile but on his death in 1814 his son, Oba Eweka II, became the new Oba, rebuilt the palace. There are still Obas in Benin City today, and yet their possessions are scattered around the world.